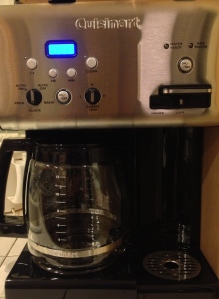 No, I wouldn’t call it minimalist. Nor is it very simple. But it is ours now, and I’m sure it will do just fine.

Our old coffee maker somehow sprang a leak. It took us some time to realize that the little bit of water we were seeing under the coffee maker wasn’t the result of careless filling of the reservoir. No, something had cracked inside, and now with every pot we brewed, water would seep out of the bottom and make a little puddle. This went on for a few weeks. As the leak grew worse, we had to resort to putting a plate under the coffee maker, just to keep the water from running down the counter and onto the floor. This morning, 10 cups of water poured into the machine only gave me 8 cups of coffee. No question about it: we needed to get rid of that machine.

But before I could volunteer to pop out to the store to purchase another $29.99 replacement, my wife said she would be more than happy to pick up the new coffee maker.

A little back story: about two months ago, before we realized that the old coffee maker was broken, my wife had come home one day with what I would consider to be a rather high end coffee machine. Now this was in the midst of December, with all of its Christmas purchases (and rapidly rising credit card bills), so I pointed out to her that the last thing we needed to be spending money on was a fancy, new coffee maker, when our old machine was working just fine. I asked her to return it, and she did.

So when she volunteered the other day to pick up our replacement, I had a pretty good idea which coffee maker my wife had in mind….

Now, I’ve known plenty of friends who have had major spousal arguments over appliance purchases that carry a much higher price tag than a coffee maker, that’s for sure. So in this instance, rather than getting into a self-righteous rant on minimalism and simplicity (I can hear me now: “You think Thoreau would make his coffee in this thing?”) it struck me that the best path here was to simply let go of a potential point of conflict and yield to my wife’s decision. I mean, it is only a coffee maker.

And I’m sure it will make a mighty fine cup of coffee tomorrow morning.

This entry was posted in Uncategorized and tagged conflict, consumption, ego, simple action. Bookmark the permalink.

Leave a Reply to Living Not Wanting Cancel reply