OK, so the other day I wrote about how all of this effort to bring order to the house was feeling a bit like fighting the tide. I discovered in the midst of that frustration that if I could simply focus on the action in front of me–instead of what should have been done in the past, or what needs to be done in the future–I didn’t have to feel that same discouragement. So in a similar spirit, today I decided to tackle that wellspring of all chaos in our house: the TV room.

I’ve made many attempts to get this particular room pulled together, and usually the results last for less than 24 hours. Honestly, it’s become a space that we’ve pretty much surrendered to the kids in all of their frantic mayhem. Unfortunately, though, it is also one of the most central rooms in the house, connecting directly to the kitchen and leading to the downstairs bedrooms and the stairs to the second floor.

So tonight, regardless of what this room might look like tomorrow, I cleared out everything that I could–I found toys and puzzles and stuffed animals tucked in corners and under cabinets that no one has played with (or noticed) in years. Those all went down to the basement in a donation bag. Clothes that normally get piled up on the couch ended up in dirty clothes hampers, or on hangers or in drawers. Towers of books made it to appropriate bookshelves (with every effort made to avoid double- and triple-stacking.)

And so on. The result: for tonight at least, we have a room that is comfortable and inviting–a room that I can sit in and not feel like I am surrounded by chaos. 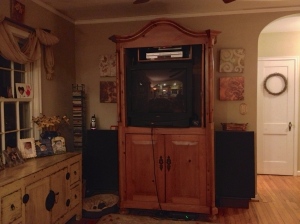 I’ve talked about the importance of building allies in the family–grown ups and children alike. As I was putting the room in order and clearing out the clutter, my middle child started to ask me questions about this blog. And then my youngest piped in as well. Now, it’s not as though they suddenly displayed an overwhelming urge to clear out their rooms of unneeded clutter–or even that they were very enthusiastic in lending a hand when I asked for help. But I did get the feeling that they understood that what I was trying to do was more than just “clean up” or “organize” a room. It was about making space for a way of living that is less likely to produce an accumulation of castaway attachments.

We’ll have to see how this room looks in 24 hours. I guess instead of just posting “before” and “after” pictures I should also post an “after the after” picture to see what sticks….

For now, though, I will enjoy the space I have created for us all. And tomorrow morning, when I come downstairs, I will be faced with a less chaotic space in which to start my day.