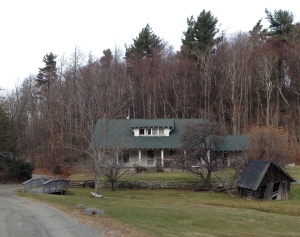 I’m not sure how far this idea will go… but there’s an abandoned house across the field from where we are living. It doesn’t belong to my mother-in-law, but it is the homestead of her grandparents, and my children’s great-great grandparents.

The property belongs to my wife’s great aunt. I think that’s a first cousin twice removed, if my Southern Math is correct.

When I got home from work today, I walked across the way with my daughter to have a look at the place. The house is in pretty rough shape. There are a couple of windows that are missing–the cardboard that once covered them now sagging open. The side porch is pretty much rotted out, and something has made its home under the step.

Yes, it is in rough shape. But it is, without question, the family homestead–the first home built up on this ridge, on what was all once family pasture.

Over Thanksgiving, the house came up in conversation, and my mother-in-law mentioned that many years back, her aunt, now in her 90’s, had said if she ever sold that house, she would sell it to her niece.

But that was many years ago. And no one is quite sure if my wife’s second cousin twice removed would ever really sell that house.

It may just be an idle fantasy, but I have to admit I am intrigued by the idea of reclaiming this abandoned family home.

But we’re not there yet. For the time being, we will be staying in our current, though temporary, home. But as winter turns to spring, we will have to start making plans to build, or to buy.

Or perhaps renovate and restore?

This entry was posted in Uncategorized and tagged caring, family, home, simplicity. Bookmark the permalink.